In the 1980s and 1990s, some members of The Church of Jesus Christ of Latter-day Saints complained to church leaders that they have been subjected to Satanic ritual abuse by family members and other members of the church. While the church and the state of Utah investigated these claims in the 1990s, no reliable evidence has been produced that suggests that these allegations are true. In 1991, the Utah State Legislature appropriated $250,000 for the Attorney General's office to investigate the allegations. The investigators interviewed hundreds of alleged victims, but they were unable "to substantiate with physical evidence the incidents reported". The 1995 report added that the specific accusations against church leaders were "absurd", and the head of psychiatry at LDS Hospital in Salt Lake City said he "has never been able to independently verify memories of satanic ritual abuse". This article is licensed under the GNU Free Documentation License. It uses material from the Wikipedia article "Reinhard_Hetze ". This entry is a fragment of a larger work. Link may die if entry is finally removed or merged. 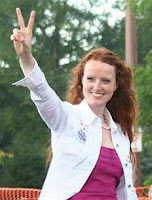 Elizabeth Jane Harper Kucinich (born October 22, 1977) is the wife of American politician Dennis Kucinich. They married on August 21, 2005. Elizabeth is a native of North Ockendon, a settlement in the London Borough of Havering in London, United Kingdom. In 1996 she went to Agra, India to volunteer at one of Mother Teresa's homes for India's poorest children.[1] Upon earning her bachelor's and master's degrees at the University of Kent, she spent 16 months in a rural Tanzanian village and worked as an advocate for regional development. This article is licensed under the GNU Free Documentation License. It uses material from the Wikipedia article "Elizabeth Kucinich". This entry is a fragment of a larger work. Link may die if entry is finally removed or merged.
# posted by Cliff Pickover @ 5:30 AM 1 comments