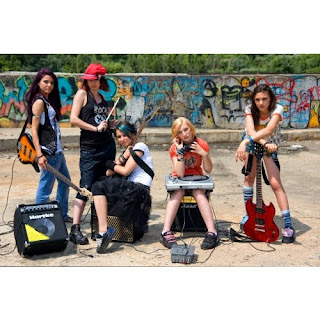 Blaxy Girls are a Romanian teenagers pop rock girl-band.
The group's first single, "If You Feel My Love" became quickly very popular in Romania.The second great hit is called Dear Mama. The clip was launched in the beginning of March like a present for the women and mothers all around the world being sung with english lyrics. The first album of the group will be launched at the end of 2009. They appeared in the semifinals of the 2008 Golden Stag Festival and were among the finalists for the 2009 Romanian Eurovision Song Contest finishing in a tie for second place.
This article is licensed under the GNU Free Documentation License. It uses material from the Wikipedia article "Blaxy Girls". This entry is a fragment of a larger work. Link may die if entry is finally removed or merged.
# posted by Cliff Pickover @ 12:38 PM 0 comments