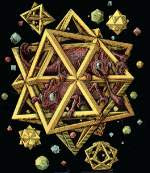 Mathematical landscape is a term that describes the objects one finds in higher dimensions. It is also used in connection with mathematician's attempts to find unifying principles in physics and mathematics. Some believe that the link between them is an as yet undiscovered symmetry that will be the same symmetry under which the laws of nature behave. A particular example of this is the Monstrous moonshine conjecture, which linked the Monster group with modular functions and string theory. Another example is the appearance of the largest exceptional lie group, E8, as the gauge group of heterotic superstring theory.
196883 dimensions: The Monster group is the largest sporadic simple group and this is the smallest number of dimensions it acts in. It is the largest finite sporadic group. The monster group is linked with continuous objects like the J-invariant and modular forms by the Monstrous moonshine conjecture. It is conjectured to be the symmetry group of the constraint polynomial in invariance mechanics.

256 dimensions: The number of dimensions (excluding space and time) to represent all the degrees of freedom from supergravity (128 bosons + 128 fermions), which is the same as the lowest order of superstring theory. This article is licensed under the GNU Free Documentation License. It uses material from the Wikipedia article "Mathematical landscape". This entry is a fragment of a larger work. Link may die if entry is finally removed or merged.
# posted by Cliff Pickover @ 11:26 AM 0 comments

Post Ejaculatory Guilt Syndrome, or PEGS, is a little known but widely experienced sexual dysfunction which lasts for approximately 5 minutes after the male orgasm.This can occur both after sexual intercourse and more commonly following masturbation. During this period the male in question will find himself completely unattracted to the person or subject matter concerned in the previous activity. The male may also experience emotions of disgust or dislike towards both themselves and any other people they interact with during the PEGS period.
The latin phrase post coitum omne animal triste est (after sexual intercourse every animal is sad) describes this phenomenon. It is usually attributed to Aristotle. The quote is sometimes appended with praeter mulierem gallumque meaning: except the woman and the rooster.

See also: The Frequency of Sexual Dysfunctions in Patients Attending a Sex Therapy Clinic in North India, Springer Netherlands 1998 This article is licensed under the GNU Free Documentation License. It uses material from the Wikipedia article "Post Ejaculatory Guilt Syndrome". Link may die if entry is finally removed.
# posted by Cliff Pickover @ 10:51 AM 2 comments

Dominoes on a chessboard puzzle

The mutilated chessboard problem is a famous puzzle introduced by Martin Gardner in his Scientific American column Mathematical Games. The problem is as follows: Suppose a standard 8x8 chessboard has two opposite corners removed, leaving 62 squares. Is it possible to place 31 dominoes of size 2x1 so as to cover all of these squares?

References: McCarthy, John (1999). "Creative Solutions to Problems". AISB Workshop on Artificial Intelligence and Creativity. Retrieved on 2007-04-27. See also: Domino tiling, My Best Mathematical and Logic Puzzles By Martin. Gardner, Dominoes on a Checker Board by Jim Loy,
Dominoes on a Checker Board. This article is licensed under the GNU Free Documentation License. It uses material from the Wikipedia article "Dominoes on a chessboard puzzle". Link may die if entry is finally removed or merged.

Best romance movies of all time

Ranked by critical review score, based on a four out of four scoring system.

Cable spaghetti (sometimes known as plastic spaghetti, rat's nest, or cable clutter) is a term used to describe the often undesirable large mass of cables behind or connecting electronic devices, both for computers and entertainment systems.
Cable spaghetti for the home user is caused by the growing number of interconnected devices used in entertainment and computer systems. Whereas a record player and cassette deck were likely the only two components found up to the 1980s, today's systems can have an amplifier (or several if a preamplifier and power amplifier are used, and yet more for a passive subwoofer, a Tactile transducer or alternative transducer), television, CD player, SA-CD player, Laser Disc player, RF demodulator, VCR, DVD player, Blu-Ray disc or HD-DVD player, personal video recorder, cable or satellite tuner, video game console, and computer all connected in the same system. Cable clutter can even cause problems with audio and visual quality due to electromagnetic interference with other cables.
Cable spaghetti can be reduced or even eliminated with a properly designed and used cable management system. However, due to the nature of the work being a time consuming trial-and-error process, few users bother or attempt it. In the context of neatly building computers, the art is known as cablegami. This article is licensed under the GNU Free Documentation License. It uses material from the Wikipedia article "Cable spaghetti". This entry is a fragment of a larger work. Link may die if entry is finally removed or merged.
# posted by Cliff Pickover @ 6:49 PM 0 comments

See also: Open problem; Encyclopedia of World Problems and Human Potential; Union of International Associations' list of unsolved problems.
This article is licensed under the GNU Free Documentation License. It uses material from the Wikipedia article "Lists of unsolved problems". Link may die if entry is finally removed or merged.

Dead-eye syndrome is a condition in computer generated films where the human characters appear artificial and creates a doll-like feeling to the characters, sometimes projecting there is no humanity in their eyes. This problem typically arises with computer generated characters made using motion capture technology. Since so much of human expressivity is determined by eye and eyelid movement, and since motion capture is unable to capture such subtle gradations, computer characters' eyes seem fixed and dilated, giving the feeling that the characters, though in motion, are dead.

Though it was not the first film to use motion capture technology, The Polar Express is generally regarded as the first film where the dead-eye syndrome was most noticeable and most distracting.

Notes: ^ a b "Quint has your first look inside the offices of Robert Zemeckis' BEOWULF!!!", Ain't It Cool News (February 7, 2006) by Eric Vespe;
Electrooculography; Uncanny Valley; Beowulf (2007 film); The Polar Express (film); Electroretinography. This article is licensed under the GNU Free Documentation License. It uses material from the Wikipedia article "Dead-eye_syndrome". This entry is a fragment of a larger work. Link may die if entry is finally removed or merged.

A Million Penguins is a collabrotive effort to write a novel. The web site through which the novel is being written uses a wiki for the authors to add their submissions. Due to the overwhelming number of edits, over 100 every hour, Penguin has had to impose "reading windows" whereby they freeze the novel so that the more serious editors can read over what has been changed and thus get their bearings on where the story is going.
The novel soon became largely incoherent as many contributors strived to develop their own independent characters and story lines. In an attempt to control the chaos, several different versions of the novel were created. These include a choose your own adventure version, and a 'banana' version. The latter being formed when the editors grew tired of removing the recurring multitude of banana references.

Many collabrotive efforts are dedicated to writing software, scientific research, or amassing knowledge. Examples of these efforts are open source software, http://en.wikipedia.org/wiki/SETI%40Home, and Wikipedia. A Million Pengiuns is different in that the goal is one of art as opposed to science. Although Penguin put a lot of effort into advertising the wiki-novel, it quickly became a target for vandalism, which has led many of its early contributors to quit the project.

References: a wiki-novelty, The Million-Author Project, A Million Penguins Novel Official site. This article is licensed under the GNU Free Documentation License. It uses material from the Wikipedia article "A Million Penguins". Link may die if entry is finally removed or merged.

This is a [parial] list of famous people, for whom smoking is clearly a recognised part of their public image, or who are known for some unusual aspect of smoking.

Pat Nixon - Was a closet cigarette smoker, a fact that came out shortly after her death. Lucille Ball - Her image was used to advertise Philip Morris cigarettes from the 1950s until the 1970s. Drew Barrymore of the famous Barrymore family smokes Marlboro Reds, about 2-3 packs a day. She started smoking cigarettes at age 9 1/2. David Bowie - Several photos--both on stage and publicity shots-- depict Bowie smoking. According to the biography Strange Fascination, he smoked both Gitane and Marlboro cigarettes. Quit in early 2000s after a heart attack. Bette Davis - American film actress who was never without a cigarette. She starred in Now, Voyager (1942), which has the famous scene in which Paul Henreid places two cigarettes in his mouth, lights them, and then passes one to Bette Davis. She died in 1989 after a long battle with breast cancer and having suffered several strokes. Sammy Davis, Jr. - American singer/actor. Often seen smoking on stage and in interviews. Died of throat cancer in May 1990 at age 64.

Walt Disney - His years of chain-smoking led to his death of lung cancer at age 65. George Harrison - Member of The Beatles who was famously seen smoking in the movies A Hard Days Night and Help!. His off-screen chain-smoking habit lead to his death from lung cancer in 2001. Peter Jennings - Journalist and former anchor of ABC World News Tonight. Died of lung cancer in 2005. Kate Moss - Model; smokes four packs of Marlboro Lights per day and has been smoking cigarettes since the age of 12. This article is licensed under the GNU Free Documentation License. It uses material from the Wikipedia article "List of famous smokers". This entry is a fragment of a larger work. Link may die if entry is finally removed or merged.