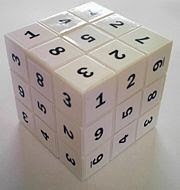 The Sudoko Cube is a variation on a Rubik's Cube in which the faces have numbers one to nine on the sides instead of colours. The aim is to solve Sudoku puzzles on one ore more of the sides. The toy was created in 2006 by Jay Horowitz. The Sudoku Cube is more complicated than the Rubik's Cube. In a standard Rubik's Cube, the player must match up colours on each side of the cube. In the Sudoku cube, the player must place the numbers one to nine on each side with no repetition. This article is licensed under the GNU Free Documentation License. It uses material from the Wikipedia article "Sudokube". This entry is a fragment of a larger work. Link may die if entry is finally removed or merged.
# posted by Cliff Pickover @ 10:19 AM 2 comments